Disclaimer: We are not talking here about lost or locked coins due to their owners forgetting they own them, losing their private keys or even sending them to the wrong wallet address (countless articles have been written about these types of mistakes, see here and here for example).

We are exploring another means by which coins are not mined properly, and what the potential impact on the total number of bitcoins this will have. But first, a quick recap on how the supply of Bitcoin is calculated.

Bitcoin is one of the first (if not the first) scarce digital currency. The scarcity is embedded in its design, as there cannot be more than 21 million of coins created over time.

Bitcoins are earned by miners when they find the next cryptographic hash as part of the PoW protocol. The reward started with 50 bitcoins, and is halved every 210,000 blocks, which is what makes Bitcoin a scarce digital asset and will help maintain its value as a store of value and cryptocurrency for a very long time.

Bitcoins are divisible into satoshis (1 bitcoin = 100,000,000 satoshis), which means the smallest amount that a bitcoin can be divided into is 1 satoshi = 0.00000001 bitcoin. Using these facts, we can estimate when bitcoins will stop being rewarded, which is in theory when halving reaches a non divisible number of satoshis: 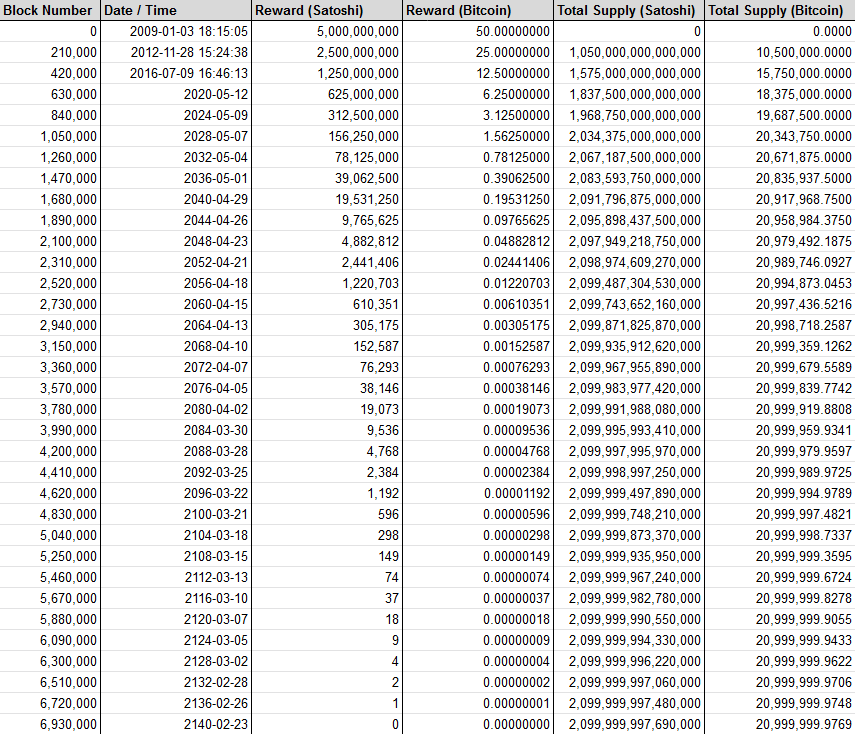 One thing to note here is that, because the Bitcoin developers decided to use a bit-shift operator to half the rewards each year (which makes sense since bitcoins are not infinitely divisible into satoshis), the reward is not exactly cut in half each year, but instead it is rounded down to the smallest integer each time. For example:

Now that we have established that the maximum Bitcoin supply is just shy of 21 million (by 0.0231 bitcoins), let’s go back to our main story.

Where did my coins go?

At Amberdata, we are all about blockchain and market data. When we added support for Bitcoin and started aggregating blocks and their transactions, we noticed some small discrepancies in the theoretical issuances. The first of these happens at block 124,724:

To understand what is going on, we need to take a small detour into how fees and issuances (or rewards) are awarded:

From all these requirements, we end up with a few rules:

The issuance on that block was short of 1,000,001 satoshis (since it should have been 5,000,000,000 satoshis) - which means the maximum supply of Bitcoin was reduced by ~1 million satoshis at this block because miners did not pay themselves the full amount they were entitled to (and these missing coins can never been reclaimed, because the new balances have been set in stone in the outputs of the transactions, and been confirmed by the many blocks added to the ledger afterwards).

How did that happen? Most likely because of bug(s) in the mining software used at the time the block was confirmed (different issues have occurred over time, because of different bugs in different mining clients).

There are several of these instances throughout the history of Bitcoin, in fact there are 1,123 such blocks at the time of writing. A few are worth looking at:

Here is a view of the losses so far:

We have shown here how the supply of Bitcoin can never reached 21 million, for two reasons:

In the grand scheme of things, these losses are very negligible and will not have much of an impact on anything (based on the price of Bitcoin at this time, this translates to roughly $250K). The amount of bitcoins lost due to human errors or purposefully locked at invalid addresses is far greater (estimated to be close to 4 millions).

One could argue that these 4 millions coins are not truly lost as they could one day be recovered: lost hard drive found or repaired, advances in computing power (like quantum computing), etc, while the ones we talked about in this blog post are truly lost because they were never generated in the first place.

Either way, they both, in their own way, contribute to the scarcity of Bitcoin, which may drive prices up over time.

When will Bitcoin reach $100k?