The Ethereum Merge Was Completed Two Months Ago. What Have We Seen Since?

The long-awaited and highly anticipated event known as The Merge, which saw Ethereum switch from proof-of-work to proof-of-stake validation through the merger of the mainnet and the Beacon Chain, was executed on September 15, 2022.

There was much anxiety – and anticipation – among the cryptocurrency community in the weeks and months leading up to The Merge (itself delayed several times). However, the impact has not been particularly dramatic, especially given the volatility typically associated with cryptocurrencies.

Here's a look at what we've seen with Ethereum since The Merge was completed:

The Ethereum Network Did Not Crash

One of the biggest concerns about The Merge was the potential of the blockchain network to crash or suffer significant issues because of a bug or an unexpected error. Fortunately, The Merge went smoothly and Ethereum did not suffer any outages as part of the switch from proof-of-work to proof-of-stake.

Given the major role Ethereum plays in the digital asset ecosystem, a network crash or sustained outage would have been catastrophic for many sectors. DeFi, in particular, would have been hit hard as Ethereum is the most commonly used blockchain for DeFi applications.

The Price of Ethereum (ETH) Dropped – But Didn't Collapse

It's not news that 2022 has not been a good year for crypto valuations. Another concern with The Merge was that it could lead to a collapse in the price of the cryptocurrency. At the same time, some argued that The Merge could cause the price of ETH to increase thanks to proof-of-stake's increased efficiency and lower energy demands.

To date, the bears have turned out to be more right than wrong, as ETH experienced a roughly 30% drop over September 10 and 21, a few days before and after The Merge, declining from $1,776 to $1,245. The price of ETH then remained remarkably stable for most of October, trading in the low- to mid-$1300 range, making it one of the least volatile periods for the cryptocurrency in recent months. The price spike to $1,500 and above -- and the ensuing drop caused by the collapse of FTX -- were unrelated to the Merge.

The Merge was not intended to address performance issues, so transaction volumes and gas fees have not shifted significantly in the aftermath.

What Did Transaction Volumes Do?

ETH transaction volumes had been declining in the months leading to the Merge, though there was an increase in the days leading up to The Merge. While the mid-September spike did not last, transaction volumes remained slightly elevated until early October, dropping sharply in recent weeks as another consequence of the FTX collapse.

How Gas Fees Have Behaved

ETH gas prices spent most of the third quarter in a downward trend, sliding in the low-mid teens by mid-August. The downward trend reversed somewhat in late August, with gas prices increasing to the mid-low 20's before dropping back to the low teens ahead of The Merge. Post-merge, gas prices spent several weeks in the teens before becoming more volatile, spiking several times to the mid-30s and one time to 61 Gwei before settling down in the mid-teens for the second half of November.

According to Ethereum co-founder Vitalik Buterin, the subsequent development for Ethereum will be focused on making the network more scalable. Dubbed by Buterin as "The Surge," this stage is expected to see the introduction of rollups and sharding to increase transaction speeds and reduce costs.

For investors, with The Merge in the rear-view mirror, a significant risk factor has been removed. Additionally, with the shift to proof-of-stake, concerns about Ethereum's environmental impact have been addressed by eliminating the need for energy-intensive mining. As a result, Ethereum – and by extension, DeFi – should see increased adoption, especially among institutions that previously minimized exposure, given the potential risks of The Merge or due to ESG considerations.

If you're looking to leverage DeFi post-merge, download our DeFi Primer ebook to learn more about DeFi's potential to transform the world of finance. 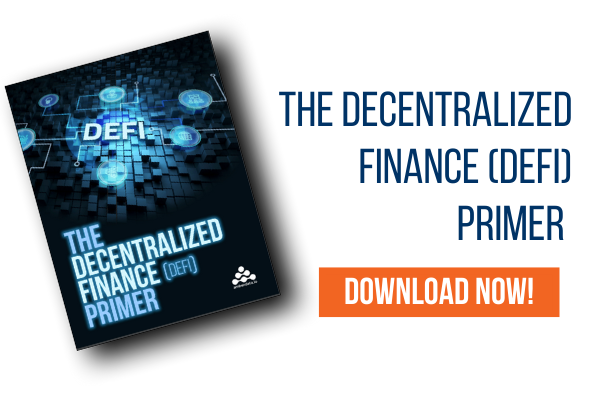 The Ethereum Merge and Its Potential Impact